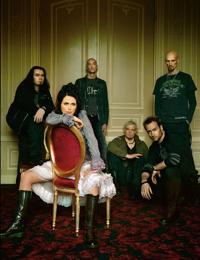 Within Temptation have come a long way in the last ten years. From their humble beginnings, the Dutch band have now sold over 1.2 million CDs and DVDs world-wide, making them not only Holland’s biggest selling musical export but also one of the fastest growing new rock acts internationally.

Formed in 1996 around the nucleus of guitarist Robert Westerholt and vocalist Sharon den Adel, Within Temptation released their debut album Enter through Dutch indie label DSFA the following April. The album saw the band playing gigs across the continent, firmly cementing their phenomenal live reputation – most notably two appearances at the legendary Dynamo festival (in both 1997 and then on the main stage in 1998). Unbelievably for a band who were attracting such critical and commercial acclaim, they were actually all still in college. And so in 1999, Within Temptation went on hiatus to allow the band to finish their studies.

Returning to the fray twelve months later, 2000 was to prove a pivotal year for the band. Building on their strong live following by playing all the major European festivals, the band released their second album Mother Earth in December. The new album again garnered critical acclaim - hugely influential Dutch music magazine Aloha tipped Within Temptation “for a major breakthrough” – and Mother Earth stayed in the Dutch charts for over three months.

Starting the year with a major club tour of their homeland, Within Temptation released two singles from Mother Earth, Our Farewell and Ice Queen. It was Ice Queen that finally led to Within Temptation’s first mainstream commercial success. The single peaked at #2 in the Dutch charts with the album re-entering the charts at #3, eventually reaching Platinum status.

The band’s popularity in Holland continued to grow and in 2002 it spread like wildfire across the continent. Mother Earth clocked-up Platinum and Gold status in Germany and Belgium respectively, while the Mother Earth Tour DVD received Gold status in their homeland and won the band an ‘Edison Award’.

Returning to the studio in 2004, Within Temptation were set to record their third and most successful record to date, The Silent Force, with producer Daniel Gibson. Fuelled by the massive international radio hit Stand My Ground, the album went to #1 in the Netherlands and Finland, #5 in Germany, Top 10 in Belgium, Portugal and Spain, Top 20 in Austria and Switzerland and Top 30 in Greece, France, Turkey, Sweden and Norway. A myriad of Gold and Platinum certifications followed.

The single Angels was released in June 2005 to coincide with their now annual festival run - which included appearances at Pinkpop, Werchter, Rock Am Ring, Sweden Rock, Ruisrock, Aerodrome and Gurtenfest – and European tours with Iron Maiden and Rammstein. In August, Within Temptation received a World Music Award for Best Selling Dutch Artist In The World. A release of The Silent Force in Japan, Australia, and the UK was next.

More plaudits followed in 2006 with Within Temptation receiving the Dutch Export Award (“Best International Selling Artist”) for the third consecutive time in a row and a Golden God Award from the UK’s Metal Hammer magazine for Best Video. They also released a special video trailer of new song The Howling via the internet in December in cooperation with game developer Spellborn.

2007 will see Within Temptation release the brand new single What Have You Done, featuring guest vocals from Life Of Agony front man Keith Caputo, and tour extensively across Europe (starting March 24 in Lisbon). Their new album, The Heart Of Everything, is set for release in March, produced again by Daniel Gibson and mixed by Stefan Glaumann (Rammstein).

In describing The Heart Of Everything Westerholt comments, “Although you can still clearly hear that this is a Within Temptation record, many things have changed and evolved. Sharon shows how versatile she is as a singer more than on any record we've done. On some songs, she sings with a lot of power; on other songs she is more melodic… a siren enchanting her subjects. Sometimes she is emotional and sensitive. The guitars also play a larger part, and we have added an extra dimension to our new songs too by enhancing them with historic samples, as we did before on Our Solemn Hour. Compared to The Silent Force, our new album is more dynamic and energetic. It has a more natural sound.“

The Heart Of Everything was released on March 12th in Europe and UK, April 11th in Japan and will be on July 24th in the USA and Canada