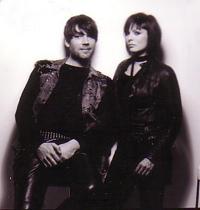 What do you get when 90’s legend, the inimitable Betty Boo enters the studio with Blur’s louche bassist Alex James and start working together for the first time?

The answer is WigWam! Late March 2006 sees the debut eponymous spiky pop dance single from the duo. The unlikely pair have been working in the studio for the last year on and off, mostly with producer Ben Hillier, and former Boo collaborators The Beatmasters - creating an album of experimental yet accessible 21st century pop.