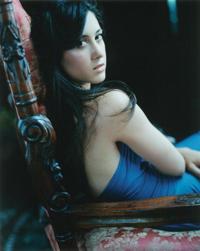 Three Grammy nominations, third studio album... the symbolic third time may well be charming for Vanessa Carlton, whose forthcoming Heroes and Thieves (The Inc. Records) showcases the maturing talents of the 26-year-old singer/songwriter/pianist. Calling it “the best batch of songs I’ve ever written,” she brings them brilliantly to life with a star team of co-producers. The result is a standout collection for an artist who first exploded onto the scene in 2002 with her stunning debut Be Not Nobody and its hit singles “A Thousand Miles” and “Ordinary Day.”

Heroes and Thieves, reflects Vanessa Carlton’s renewed confidence as well as a continuation of her uncompromising approach to recording. There are soaring songs like “More Than This,” the pensive “Hands On Me,” the aching break-up song “My Best” and the alluring ballad “Home,” whose stripped-down sound places her sultry voice front and center.

Most of the songs were written on Carlton’s piano in her apartment in New York, which may account for the album’s discernible sense of terrior. A sense of immersion also guides this creative effort. “I was surrounded by a beautiful team of musicians that allowed these songs to breathe and grow organically,” she says. “All of my favorite albums had a way of bringing you into the music, where you’re listening in on a performance that is genuine. I think we achieved that because we were all loving the music and not just going through the motions.”

Vanessa Carlton first began playing the piano as a toddler, continuing on an artistic road with her attendance at the School of American Ballet in New York, a path she would eventually abandon in favor of songwriting. She re-embraced the piano and began performing in bars and clubs across Manhattan. While studying at Columbia University, Carlton was signed to Interscope Records, but made her formal debut on A&M under veteran producer Ron Fair.

Her debut album in April 2002, Be Not Nobody, resonated with audiences of all ages, especially the hit piano single “A Thousand Miles,” which reached the Top 5 on Billboard’s Hot 100 Singles chart. Carlton went on to earn 2003 Grammy nominations for Record of the Year, Song of the Year and Best Instrumental Arrangement Accompanying Vocalist (“A Thousand Miles”). Her second album Harmonium, which yielded the single “White Houses,” continued to inspire an increasingly loyal fan base and garnered some the best reviews of her career.

What Vanessa Carlton has learned during the past five years is clearly the fodder that makes up the most compelling components of Heroes and Thieves, a thematic album best listened to in its entirety, despite the cafeteria habits of the iTunes generation. “People tell me my songs are a little weird or unconventional, but in a good way and I like that,” says Vanessa Carlton. “I really wanted this album to be the one you want to wake up to on a Sunday morning and listen to over and over.”