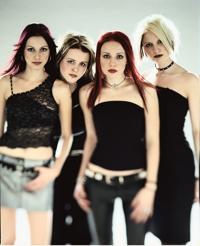 Tuuli are four beautiful girls who know how to rock. They have been described as a female Blink182, given their dynamic live chops, and playful attitude. No strangers to the road, Tuuli have just returned from their third US tour, a coast to coast all girl package with The Donnas and Bratmobile. They played to packed houses in virtually every city, including two sold out nights in LA, a SXSW showcase in Austin where they were interviewed by VH1, and finished by headlining the Chart Magazine/CBC Radiosonic Canadian Music Week Saturday night finale in their hometown, Toronto.

Formed in 1997, Tuuli is bassist Claire Blake, guitarist Dawn Mandarino, guitarist/vocalist Jenny Vegas and keyboardist Kathie Wallenbrock. Tuuli radiate pop creativity with a punk rock edge, bringing back the sounds of pioneering bands like The Runaways, The Go-Gos, The Clash and the Ramones, while also playing homage to 90s acts such as Hole, Veruca Salt and Garbage.

Since the band started at a rather young age, Tuuli has had to prove themselves as musicians. This they have handily accomplished, having been the house band for Comedy Centrals Premium Blend, opened for the likes of Cheap Trick, and The Donnas, and having their songs featured on BBC Radio 1, K-ROCK in Los Angeles, CFOX, KXLU, CBC, and hundreds of college radio stations. Music critics that are initially skeptical because of the bands great looks, have come out lavishing them with praise for their creativity and musicality, resulting in major press features in The Spill, Time Out, Now, LA Times, Toronto Star and others.

Tuulis recently released EP Rockstar Potential on the Sympathy For The Record Industry label has been selling briskly at retail and at the bands shows. Produced by Rob Sanzo, the EP features such standout tracks as Whos The Fool Now, Tough Guys, and a cover of The Vibrators Baby Baby. For the next few months Tuuli will be writing and recording their debut full-length CD, which is set for release in the fall of 2001 on the new Linus Entertainment label, distributed in Canada by Warner Music.