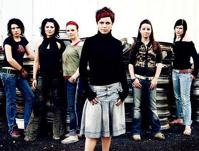 Tiktak is a Finnish all-girl band which was formed in a band school in Helsinki. The band signed for Universal Music on 7th of May 1999 when most of the band members were only 13 years old. They released their first single "Sekoitat mun maailman" on 23rd of August 1999 and the second single "Lopeta" was their breakthrough. Since then the band has gained great domestic popularity.