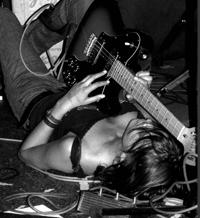 The Favours appeared on the UK music scene in 2003 and self-released the album 'Magpies Revenge' in the summer of 2004. A split EP, featuring tracks 'Kill' and 'Out of Control', was released by the Manchester based label Filthy Little Angels in August 2004.

In August 2005, the band was selected to play the Unsigned Stage at Leeds Festival and in January 2006, the band toured America with The Wrens. This sell-out tour included gigs at New York Bowery Ballroom and The Northstar Bar in Philadelphia. The band then went on to headline their very own New York show. The Favours teamed up with The Wrens again on a UK tour in Spring 2006, ending with a brilliant sell-out show at London's ULU.

In August 2006, The Favours were selected to be one of the Next Stage artists at the BBC's Electric Proms Festival by BBC Radio Humberside's Raw Talent show. As part of this event the BBC arranged for the band to work with a top Producer and his team to make their first ever video. The Favours then went on to play Camden Barfly on the 29th October as part of the event, alongside the likes of Kasabian, The Who and Paul Weller.

In November 2006, The Favours were chosen to be featured in a BBC 'This is what we do' advert which was shown repeatedly on BBC1, 2 and 3 over a 2 week period....

Review by www.artrocker.com of Festival Appearance:
"At this point we decide to have a breather and plan to just to take a quick look at The Favours to see if they are any good. I walk into the room, take one look, one listen to them and ...half an hour later they finish their set and I breathe out. This band are so polished, so sharp, so blindingly brilliant that compared to them every other band here today are like little kids playing in a dressing-up trunk. The Favours come from Hull, are a four piece comprising three guys and a startlingly good looking lead singer and they play power pop of the sort that the Cardigans used to when that band were in the charts a few years back. I cannot believe that this lot are playing here and are not selling out places like the Astoria. Not a duff song in the set and not a hint of shambles about them. They are already the finished article, the real deal. They tell us that their album is on sale upstairs and I trample people underfoot to purchase a copy." Wyldeman