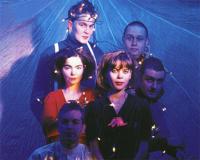 The Sugarcubes were the biggest group ever to emerge from Iceland, which helps explain their off-kilter sense of melody. Their 1988 debut, Life's Too Good, attracted terrific reviews and became a college radio hit, but they never were able to recapture that sense of excitement. According to group legend, the Sugarcubes formed on June 8, 1986, the day that vocalist Björk (born Björk Gundmundsdottir) gave birth to her son. Prior to that day, the members of the group had been a variety of Icelandic bands. Björk had the longest career out of any of the members. When she was 11 years old, the vocalist had recorded a children's album. In her late teens, she joined the Icelandic post-punk band Tappi Tikarrass, who released two albums before splitting in 1983. Drummer Siggi Baldursson (born Sigtryggur Baldursson, October 2, 1962) was a member of þeyr (aka Theyr), whose most prominent international moment came in 1982, when they recorded with Youth and Jaz Coleman of Killing Joke. At the same time Theyr was popular within Iceland, Einar Benediktsson and Bragi Olafesson formed a punk band called Purrkur Pillnikk, which released records on Benediktsson's own label, Gramm. By 1984, Björk, Benediktsson, and Baldursson had joined forces, forming K.U.K.L. with keyboardist Einar Mellax. K.U.K.L. — which means witch in Icelandic — was an noisy, artsy post-punk band that released several singles on the independent British record label Crass. In 1986, K.U.K.L. evolved into the Sugarcubes, adding Björk's then-husband Thor Eldon on guitar and Bragi Olafesson on bass. In late 1987, the band signed to One Little Indian in the U.K., Elektra Records in the U.S. The Sugarcubes released their debut album, Life's Too Good, in 1988 to critical acclaim in both the U.K. and the U.S. "Birthday," the first single from the album, became an indie hit in Britain and a college radio hit in America. In particular, Björk received a heap of praise, which began tensions between her and Benediktsson. By the time the group recorded its second album, Thor had divorced Björk and married Magga Ornolfsdottir, who became the group's keyboardist after Einar Mellax left. Furthermore, Olafesson divorced his wife — who happened to be the twin sister of Baldursson's wife — and married Benediktsson, making their union the first openly gay marriage in pop music. Here Today, Tomorrow Next Week!, the Sugarcubes' second album, was released in 1989. The album featured a greater vocal contribution by Einar, which was criticized in many of the record's reviews, which were noticeably weaker than those for Life's Too Good. After the release of Here Today, Tomorrow Next Week!, the band embarked on a lengthy international tour. At the conclusion of the tour in late 1990, the bandmembers pursued their own individual interests. Stick Around for Joy, the band's third album, was released in 1992; before the record appeared, a collection of remixes called It's-It was released in Europe. Stick Around for Joy received better reviews than Life's Too Good, but the album failed to yield a hit single. Following its release, the Sugarcubes disbanded. In 1993, Björk launched a critically acclaimed and commercially successful solo career that was based in dance music.