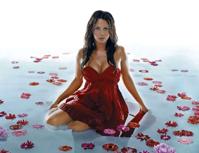 Sara Evans is a study in contrasts: a smooth-skinned looker hailed by People magazine as one of the world's most beautiful people, yet one who still embraces the values of her small town Missouri upbringing. The Academy of Country Music's reining Top Female Vocalist and a Platinum-selling recording artist who is a deeply spiritual woman with an occasionally bawdy sense of humor.

Accompanying her personal dichotomies, Evans' recording career has traveled a wide course: She was hailed as a country traditionalist when she made her recording debut in 1997 but freely explored pop and rock influences in her ensuing albums. She clearly knew what she was doing: Her Born To Fly CD earned an Album of the Year nomination from the Country Music Association, and her Restless project garnered a similar nod from the Academy of Country Music.