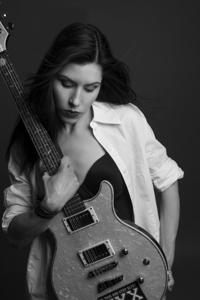 Rose Cora Perry is the former frontwoman of major label signed act Anti-Hero and has performed at some of the world’s most renowned music festivals including: Canadian Music Week, NorthbyNortheast, Pittsburgh’s Three Rivers Regatta, Warped Tour, and MEANYFest NYC.

Bringing audiences of over 500,000 to tears with her emotional sound and sincere performances, Perry has been crowned a well-respected industry pro within Canada’s music landscape. In line with her efforts, in 2011, she was invited to attend the 53rd Annual Grammy Awards in Los Angeles as a honourary special guest artist.

She's graced the covers of magazines, achieved “Top 100” radio singles, conducted numerous guest lectures, served as a Voting Committee Member for the Jack Richardson Music Awards and was elected to represent the “voice of the independent musician” in a three-month expose for Canadian Musician.

While most recognized for her contributions to the Great White North's indie rock scene, as a classically trained performer with over 20 years on stage, Perry is skilled at singing in any genre and compelling audiences of all ages - a fact that was proved when she landed a starring role as Vivienne Kensington (Elle Wood's adversary) in Simply Theatre's production of Legally Blonde and was credited as playing the character with "the right amount of feline fastidiousness and overweening self-possession."

In 2010, Perry launched her critically acclaimed debut solo album, "Off Of the Pages" and its associated non-for-profit foundation, MusicSaves, which aims to impart onto troubled youth the healing capacity of music.

Beyond her music-making, Perry works as a Photography Model, Graphic/Web Designer, Social Media Manager/Publicist and is the brainchild of four successful column series. In 2012, she finally got to fulfilling a longstanding shelved dream of hers: to make the transition from Print Journalism to Broadcast.

Perry hosted two popular programs on RogersTV: London's Driven, a community-produced bimonthly pilot series which features young entrepreneurs striving to make a difference in the Forest City and Mosaic, a regularly scheduled “live-to-taped” weekly program which profiles members of London’s multi-cultural community and the organizations that serve them.

Rose continues to regularly lend her talents toward various non-for-profit and community events acting as an Emcee, including VegFest London, London Defeat Depression and London's Run for Ovarian Cancer.

2016 marks the triumphant return of Perry's musical efforts with the highly anticipated worldwide release of her sophomore solo album, "Onto the Floor" - a narrative set to melody. In conjunction with the album's release, Perry has formed powerhouse trio, The Truth Untold, featuring the exceptional local talents of Jeremy Sieberer on Backing Vocals/Bass (Partners in Health) and Tyler Randall on Drums (Blind Mag/Swerve).

Rose Cora Perry has three visions she hopes to achieve as an artist: