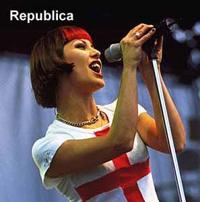 As Brit-pop remained popular in England during the mid-'90s, Republica hit the charts with a sound closer in feel to '80s indie-dance groups such as the Pet Shop Boys and New Order. Vocalist Saffron was born in Nigeria, and began singing with club-staples N-Joi and the Shamen, as well as Jah Wobble. By 1995, she had met keyboard players Tim Dorney (previously with Flowered Up) and Andy Todd (who has produced Barbra Streisand and Bjork, among others). They began writing songs, and after recruiting guitarist Johnny Male and drummer Dave Barborossa, Republica debuted with the single "Out of the Darkness." U.K. indie-dance label Deconstruction signed the group and released its self-titled debut. From the album, "Ready to Go" became a hit both in England and in the States, where it stormed the alternative Top Ten during late 1996. The follow-up, 1998's Speed Ballads, only gained British distribution.