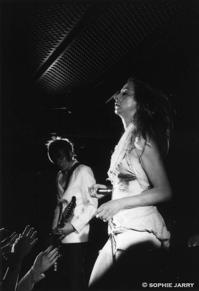 QueenAdreena is an independent rock band from London, England which is currently signed to One Little Indian Records. Vocalist KatieJane Garside and guitarist Crispin Gray had previously collaborated in the celebrated but short-lived band [Daisy Chainsaw]. They were joined by drummer Billy Freedom and bassist Orson Wajih and then released their first album, Taxidermy, in 2000, on the Blanco y Negro Records imprint.

Billy Freedom was replaced in 2002 by drummer Pete Howard, formerly of The Clash. The band signed with Rough Trade for their sophomore effort, 2002's Drink Me, featuring the roaring lead single "Pretty Like Drugs."

Rough Trade dropped them shortly after the release of Drink Me, and Wajih left the band at that time. The band signed with One Little Indian Records and released 2005's The Butcher and the Butterfly with KatieJane's sister, Melanie Garside on bass, who left soon after and was replaced by Paul Jackson.

Paul Jackson left in 2006 and was replaced by Nomi Leonard.