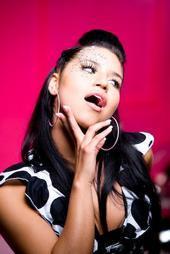 The name of their debut single may be “Rock Star,” but the two cousins that make up Prima J are everything but. In fact, Jessica and Janelle Martinez are so down-to-earth, it seems just as odd that their song is the lead track from the Bratz-- Motion Picture Soundtrack (released by Geffen Records July 31st, with the movie following August 3). Far from precocious and everything but bratty, the pair are actually a real-life version of the comradery and competitive edge captured in the movie.

Their recent discovery and success aside, Jessica and Janelle still can’t believe that they’ve not only signed a record deal and are currently finishing their debut album for release later this year, but are also appearing in what is expected to be one of the summer’s cinema hits and have recorded an infectious single destined to help make the soundtrack a smash. “None of this has hit either of us yet,” says Janelle, 18. “I feel like I’m dreaming and someone needs to wake me up. It’s one thing to record a song and a video, but it’s another thing to hear it on the radio or see it on TV. That’s where it’ll really hit me…”

Forgive the girls for not having teen-idol egos, but they’re just too happy and excited to be doing the same thing they’ve been doing for most of their lives—singing and dancing. “We just did the video for ‘Rock Star,’ and it was the greatest experience ever,” says Jessica, 19, with an excited laugh. “We love dancing, and we were dancing all day. It’s so great to get this opportunity to do it in front of a camera, and show people that we do belong here!”

“We’ve always stuck together, and we’ve always had that fire and known that we really wanted to do this,” says Jessica. “If one of us was good at something, the other was just as good, because we always did everything together.” “And, if one of us ever thought we couldn’t do something, we’ve always been there to support each other,” says Janelle. “We’re so close, we’re like sisters, we’re best friends and we’re never apart. This is just a dream come true.”

“Now that we’ve gotten this far, we’ve realized that it doesn’t matter if you’re the average, girl-next-door type,” says Jessica. “It doesn’t matter what you look like or where you’re from, you should never think that you can’t accomplish something.”

As Mexican-Americans, they hope to be role models to both American and Latin girls, as they consider themselves the face of the new Hispanic in America, part of an emerging generation that “speaks English and lives Latin.” They even go so far as to affectionately refer to each other as “chilosa", a made-up word that they feel defines Prima-J: two sassy, classy, spicy and feisty girls. They may be the girls next door, but they’re also fun and fearless, with an independent spirit and deep sense of inner confidence.

“We want to have a good time, but we also want to send a message to younger people and be idols for American and the Latin community,” sums Janelle. “Too many people don’t know that if they set their mind to it, they can accomplish anything, just like we have.”