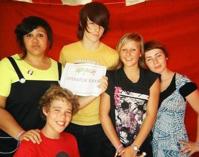 Operator Please is a five-piece band from the Gold Coast that formed early in 2005. Their adventure began when Elanora High School was holding its annual Battle of the Bands competition. Discovered through their MySpace profile, Operator Please is currently signed to Virgin/EMI for Australia and New Zealand and Brille in the UK.

Virgin Blue recently release their next two-year campaign based around Operator Please’s song “Get What You Want”. Operator Please are scheduled to tour Great Britain and some parts of Europe later this fall, appearing at the Reading and Leeds festivals.