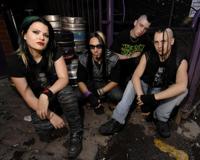 We're dirty and hungry and angry. We live in a van and spend most nights on a hard floor. We're passionate about music, individuality, independance, freedom and Jack Daniels. We don't want to appeal to the lowest common denominator, have a number one hit or play wembley arena. We prefer outcasts, selling our own CDs and sweaty hovels full of passionate music fans and loud, trashy music. Our supporters tend to be a bit mad, we like that.


obsessive / adj., noun adj. thinking too much about one particular person or thing; noun (psychology) a person whose mind is filled with thoughts of one particular thing or person so that they cannot think of anything else

compulsive / adj. 1 (of behaviour) that is difficult to stop or control 2 (of people) not being able to control their behaviour 3 that makes you pay attention to it because it is so interesting and exciting