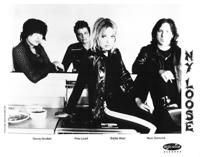 NY Loose was THE bands that set the scene and filled the clubs on the N.Y. City punk rock class of '94. They released a collection of songs on Flipside Mag's label 'Rock And Fuckin Roll' in '95 that started all of the buzz. After touring and exposing themselves to UK crowds they got the attention of Hollywood Records and released their great ROCK 'N ROLL album, "Year Of The Rat". Being featured on "The Crow" soundtrack album and going on a national tour with Marilyn Manson (a fan of the band)...BIG things were lined up for NY Loose. Unfortunately, they became victims of the crap of the music industry and its executives and the band wound up breaking up.
NOW, lead singer and guitarist Brijitte West is re-lighting the torch with a new band line-up to coincide with the release of "Born To Loose". The point is that this band ROCKS.