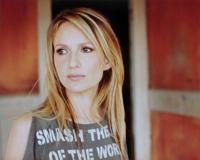 As its title suggests, there is a quality both instantaneous and enduring about Tonight And The Rest of My Life, the brilliant debut album from Nina Gordon on Warner Bros. Records.

What grabs you instantly upon hearing these 13 pop gems (12 original and one cover) is the pure pleasure of Gordon’s performance — an exuberance mixed with consummate craftsmanship; a passion seamlessly integrated in a rich range of styles; a point of view both hard-won and revealing, worldly wise and vulnerable. This is music made for the best possible reason: the sheer love of it.

And what stays with you, long after the last notes of Tonight And The Rest of My Life fade, is what makes all music memorable: melodies that linger, lyrics that speak the truth and performances that bring it all to life. In short, Nina Gordon has delivered an album that’s both timely and timeless.

Produced by Bob Rock and recorded over a leisurely seven months in Hawaii, Tonight And The Rest of My Life features a remarkable lineup of guest musicians, most notably Jon Brion (of Aimee Mann, Fiona Apple and Macy Gray fame), along with drummer Stacy Jones, guitarist Michael Eisenstein and bassist Scott Riebling. Standout tracks range from the wry and revealing "Now I Can Die" to the heartbreakingly tender "Hold On To Me," from the cinematic progressions of "New Year’s Eve" to the scathing anti-love song "Hate Your Way." It is, in fact, that rarest of musical entities — an album to play all the way through…again and again. That’s not entirely surprising, however, considering the artist’s musical pedigree.

Former co-founder of the acclaimed quartet [Veruca Salt], Nina Gordon was the writer and vocalist responsible for that group’s two biggest hits, the smash "Seether" and its follow-up, "Volcano Girls." In point of fact, [Veruca Salt]’s repertoire, both on stage and in the studio, was heavily laden with Nina’s distinctive singing and songwriting ability, a truth attested to by her contributions on the group’s two albums, American Thighs and Eight Arms To Hold You, and the EP Blow It Out Your Ass It’s [Veruca Salt].

"I have a feeling of knowing exactly who I am right now," says Nina on the creative context of her debut album. "I’m very much in touch with myself. There have been times when I’ve sat down and tried to write and it was like someone else speaking through me. And then there are times when I’ve felt something unique and personal shining through. Those are the moments, both as a songwriter and as a person, that are the most gratifying and they’re all over this record."

There is an undeniably cathartic element to Tonight And The Rest of My Life — a liberation from the past and a claim on the future that has more than a little to do with the circumstances of [Veruca Salt]’s demise. The Chicago-based group, which was the first and only band Nina had ever been in, broke up amidst what she terms as a "highly charged atmosphere."

"I think the best way to put it," she explains, "is to say that we worked together for six years and got to a point where we just weren’t enjoying the process as much as we once had. Six years is about the longest I’ve ever done any one thing and, of course, walking away from those relationships was very difficult. But the fact was we were no longer on the same page, personally or creatively. When you’re in a band, particularly one with two singers and songwriters, you end up editing and altering your work to fit into that format. As soon as I left [Veruca Salt], I found myself turning to my guitar and writing as a way of rediscovering myself. When I was a teenager and first started writing songs, I wanted to try and impress my big brother or my boyfriend. That was my audience. Then, in [Veruca Salt], I had the other band members to consider. Now, for the first time in my life, I’m doing exactly what I want. As much as anything, that’s what this record is about."

All of which makes the impact of Tonight And The Rest of My Life that much more striking. With alternately playful and profound wordplay and musical settings that bring the emotional core of each performance into sharp focus, Nina Gordon’s album is unabashedly personal and aggressively up-front.

"I know every songwriter is different," she remarks, "but for me, the point of the whole process is to explore yourself. It’s like writing in a journal. If you’re concerned about what other people might think, it’s hard to be completely honest and open. I want my music to be liked, but what's more important is that it touches something real in me, and if it does, it’s more likely to touch others."

Tonight And The Rest of My Life unquestionably achieves that ambitious end and, along the way, offers one of the most accessible and entertaining musical narratives in recent memory.

"I think if you were a [Veruca Salt] fan you might pick up a common thread in this music," Nina concludes. "But my hope is that it really won't be compared to what's come before. This is something very different."

It seems certain that Nina Gordon's remarkable new album will be heard on its own terms if only because Tonight And The Rest of My Life, like its creator, is stunningly honest and immediately captivating, with an enduring quality and presence that is rare indeed.