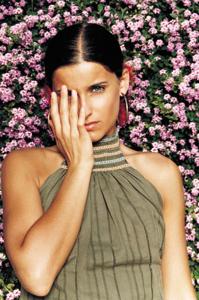 Nelly Furtado played her first real shows after signing a record deal last year at the tender age of 20. "I did four Lilith Fair dates, and for the encore, everyone who performed that day would get onstage and sing [Bob Dylan's] 'I Shall Be Released.' I was singing with Chrissie Hynde and Sarah McLachlan and Beth Orton," she says, still incredulous. "It was like a dream. I just kept thinking, What am I doing here with all these seasoned pros?'" It's a reasonable question for an untested artist who grew up in remote Victoria, British Columbia, a first-generation Canadian, the daughter of working-class Portuguese parents. Furtado has indeed taken only the first few steps along her path, but her wide-ranging taste suggests an artist who has sampled much that music has to offer.

Further evidence of her eclecticism is found in the instruments she plays (guitar, ukulele, trombone), the languages in which she sings (English, Portuguese, Hindi) and the debut album that represents another dream fulfilled. To be sure, Whoa Nelly! (released on DreamWorks Records Sept. 26, 2000) boasts a hybrid sound that is uniquely her own. The most recent chapter in Furtado's story began when, at 18, she leapt onstage to sing at a Toronto talent show for mostly black, female performers. It was there that she met her manager, who also represents multiplatinum Canadian act The Philosopher Kings. Shortly thereafter, the Kings' Gerald Eaton and Brian West produced a demo for Furtado. The results were adequate, but the well-rounded teenager already had plans to go backpacking in Europe, then head home to study creative writing.

She nonetheless stayed in touch with Eaton and West, who kept insisting she return to Toronto. Furtado recalls: "I went to see The Philosopher Kings both times they played in Victoria, and both times they said, 'You gotta come to Toronto and do some more demos.' I was, like, 'I don't know. Im in school, I want to write, I'm learning to play guitar - blah blah blah.' Then one day Gerald just called and said, 'You're coming to Toronto.' So I went for two weeks and it was awesome. The three of us totally clicked. Gerald and Brian are amazing - smart and charismatic and wonderful to work with. They created the most positive creative environment you could imagine."

The material they recorded during those sessions ultimately led to Furtado's deal with DreamWorks Records (where she was signed by A&R exec Beth Halper). Eaton and West (known collectively as Track and Field) came on board as production partners.

Among other things, Whoa Nelly! is a melding of Furtado's accumulated musical inspiration. The singer-songwriter grew up with plenty of mainstream pop - Abba, Lionel Ritchie, Madonna, Paula Abdul - but in her formative years, she became fixated on its urban incarnation. An infatuation with youngsters Kris Kross led to an embrace of early '90s R&B like New Edition, Bel Biv Devoe, Salt-N-Pepa and Jodeci. Furtado informs: "On my 12th birthday one of my friends bought me a Mariah Carey tape."

The first tape she bought for herself was by TLC, which foreshadowed her development into a hip-hop fan. De La Soul, Ice-T, Digable Planets, P.M. Dawn - these artists consumed Furtado until her senior year of high school, when she started listening to her older brother's CD collection. There she discovered Radiohead, Oasis, Pulp, Garbage, U2 and The Verve. That summer a friend from London upped the ante by making her a mix tape of music by classic artists like Simon and Garfunkel and modern standard-bearers like Prodigy and Portishead. "I got into The Beatles then, too, and Smashing Pumpkins," she says. (Furtado's sponge-like nature can be partially attributed to what she calls her "obsession" with pop culture. "I love it," she says. "I can't help it - I love awards shows, magazines, movies. I'm totally star-struck").

This panoply of influences is matched by the music of Furtado's ancestral homeland. When she was 16, she took a giant step toward securing her own creative voice while on a trip to Portugal, where she uncovered the local equivalent of an MC battle: "I went to this club and just got up onstage and started singing, making up lyrics off the top of my head. That's what hip-hop's all about - freestyling. The fado tradition in Portugal has a similar thing called cancoes desafios, which is basically spontaneous singing. You try to show up the other person onstage with you - you dis their mother or say they're lazy or something. There are a lot of colloquialisms involved and youve got to know the language of the land pretty well to get it right."

The realization of this cultural convergence gave way to another epiphany when Furtado went to London to visit the friend who'd given her that all-important mix tape. "One night, my friend's dad played a Brazilian compilation CD and I was hooked," she declares. "It was African and Portuguese music coming together. The emotion and the romanticism comes from the Portuguese side; the rhythm and groove and energy come from the African side." Someday she wants to make an album of Brazilian music, sung entirely in Portuguese.
Actually," Furtado continues, "I always had this goal to learn guitar. I played ukulele at school, so I knew those four strings - two more couldn't be that much harder, right? And I already knew the strumming action. But it takes a while before you get your own identity on guitar; when you start, your songs sound pretty straight-up folk."

Still, playing this traditional instrument did not discourage Furtado's interest in progressive music. "I'm attracted to the roots of anything fresh and cutting-edge," she confirms. Her enduring absorption of other artists' work reflected this penchant. "I love Jeff Buckley," she says. "Grace - that changed my life. He totally influenced my singing and songwriting and performing, everything." She also began to soak up the music of international artists like Amalia Rodrigues and Nusrat Fateh Ali Khan. Of course, all of this was brought to bear on Whoa Nelly, but it was the artists who traversed cultures that left the deepest impression on Furtado's debut.

"I made this record because I was inspired by Cornershop's When I Was Born For The Seventh Time," she states. "It was pop music, but it was a mixture of pop and Indian music, which I found totally exciting. [Beck's] Odelay had a similar effect on me. It was super-creative, wonderful-sounding, full of integrity - and not melancholy. Sometimes it seemed that everything I liked was sad, so hearing that was very meaningful for me. Those two records made me realize I wanted to make a pop album, something with the edge of the Portuguese and Brazilian music I love, but also something happy. I liked the challenge of making heartfelt, emotional music that's upbeat and hopeful - like Cornershop and Beck and Bob Marley have been able to do."

Furtado extends this philosophy to her live show. "I don't want to be on the road every night dwelling on the negative stuff and getting depressed over it," she says. "I've gone to see some of my favorite bands, like Radiohead, and was, like, how can they do this every night? How can they torture themselves like this? That's why Beck's show was such a big deal. He made me feel like I can groove every night, like I can party onstage. Some of the music I write can put me in a difficult emotional space and I need to balance that. I want to spread the love; I don't want people to cry after my show - unless they're tears of joy."

Furtado is eager to put this commitment into practice. "I can't wait to get on the road," she says. "That's what I've been waiting to do my whole life, you know? It's always been my dream to have my own band. I've always imagined siting on the bus, reading for hours until we get to the next city. That might seem weird to some people, but I've always been a nomad at heart; I love to wander."

Furtado's focus on a future of such dreams-come-true does not prohibit her from living in the moment. She particularly savored her time in the studio. "I could feel how special that was the whole time we were doing it," she affirms. "I know I'm going to look back on it with very sentimental feelings. Toward the end, when we'd be sitting around sipping Coronas, I began to feel sad. I'd been making music with Gerald and Brian for a year and a half and it was almost over. It was a little like the end of high school - we needed some yearbooks to sign."

But Nelly understands that there are other musical avenues yet to explore. "I'm ready to move on," she says. "I want to grow and develop. I'm just gonna keep on writing and see where it takes me."