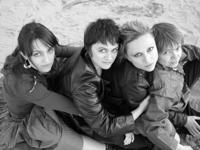 Theire name is MUMBLE RUMBLE and this all-female quartet was formed in Bologna (Italy) in 1990.

Their project has always been to create original and personal songs based on rock, by using different styles and languages in absolute freedom. This is evidence of their reluctance towards any kind of “borders” and everything that can bind their expressiveness.

Important, strong, sensual, energetic, deep, rational and passionate at the same time: these are some of the adjectives that describe the music of four girls with different personalities joined together by a single overwhelming passion. The result of this alliance is a mix of rock-core-emo-lyric-metal-experimentation.

MUMBLE RUMBLE work live on a regular basis and these are their most important steps: winners of the ArezzoWave Festival in 1992, the only female band winner in the most famous Italian rock competition. This superb debut was followed by a tour in Italy with “ArezzoWave on the Rocks” in 1993. Support band of Moving Targets, F.F.F., Lunachicks, NoFx, Fugazi, Motorhead. They have taken part in the most prestigious Italian festivals such as Nightwave, Adidas Streetball Challenge, Beach Bum Rock Festival, M.E.I..

MR have appeared in many TV shows both on music and national Television channels and many national newspapers. Two albums released: “Kapow” for the Aaarrgh Rec. label in 1994 and “RicordareDimenticare” for the Lilium/Sony label in 1999.

MR is a band with a long career. During these years many things have changed but their spirit has remained the same. This has made them one of the most interesting alternative rock bands in Italy and undisputed “pioneers” in the female scene.