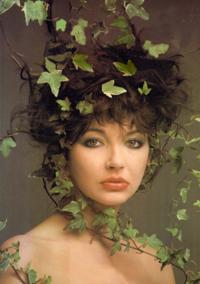 An inspiration to many modern day artists.

Kate Bush (Born Catherine Bush on 30 July 1958, Bexleyheath, Greater London) is an English singer, songwriter, musician and record producer. Her eclectic musical style and idiosyncratic lyrics have made her one of the United Kingdom's most successful and original solo female performers of the past 30 years.

BRIT Award-winning and Grammy Award-nominated Bush was signed up by EMI at the age of 16 after being recommended by Pink Floyd's David Gilmour. In 1978 at age 19, she debuted with the surprise hit "Wuthering Heights," topping the UK charts for four weeks and becoming the first woman to have a UK number one with a self-written song. She has since gone on to release eight albums, three of which topped the UK album charts, and have UK top ten hit singles with "Running Up That Hill," "King of the Mountain," "Babooshka," "The Man with the Child in His Eyes," and "Don't Give Up."

During her tour of 1979, the only tour of her career, she became the first ever singer to use a wireless headset radio microphone on stage. With her 1980 album Never for Ever, she became the first solo female British singer to top the UK album charts. Her songwriting ability was recognised in 2002 with an Ivor Novello Award for "Outstanding Contribution to British Music." In 2005, she released Aerial, her first album in 12 years. The album was a UK success and earned her BRIT Award nominations for "Best Album" and "Best Solo Female Artist."