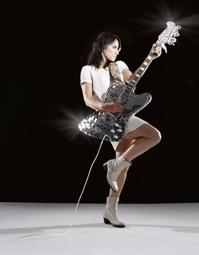 Scottish singer-songwriter KT Tunstall burst onto the public consciousness last year with her gritty debut album ‘Eye to the Telescope’, a provocative sonic mesh of heartfelt pop, rootsy, electric blues, and left-field alt-rock. Eye spawned three hit singles — the Grammy-Award nominated “Black Horse and the Cherry Tree,” “Suddenly I See,” and “Other Side of the World” — all of which became omnipresent on radio, television, movies, and the Internet. Thanks to the multi-media exposure, ‘Eye’ is certified platinum in the U.S., with worldwide sales exceeding 3.5 million copies.
Now Tunstall is readying her follow-up, entitled ‘Drastic Fantastic’, which will be released by Virgin Records on September 18th, 2007. It showcases the 31-year-old’s growth as both a songwriter and musician on songs like the thumping “Hold On,” the rollicking “Saving My Face,” the jazz-inflected “Someday Soon,” and the frisky pop gem “I Don’t Want You Now.” “I wanted to be braver,” Tunstall says of the album. “I wanted to push the musicality. You can’t let previous success scare you away from moving on.”