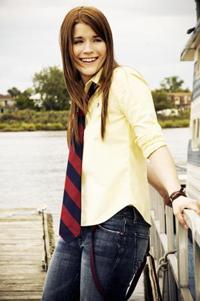 Jenny Owen Youngs is a feisty, hyper-sensitive, disease-free singer/songwriter/former girl scout who wants to be your friend. Claiming influences from Beck to Jesus Christ Superstar to Britney Spears, her music is an echo of Erin McKeown hopping into Jeff Buckley¹s Pontiac, cruising backwoods Alabama red dirt roads and singing along to The Sundays and Nick Drake. Her songs straddle the heart-wrenching and the tongue-in-cheek and say giddyup.

Raised in the lush greenery of northwest New Jersey amongst cows, haystacks, and eastern deciduous forest, our heroine began singing immediately upon exiting the womb. After exploring the flute (elementary school) and the tuba (junior high), Jenny finally stepped up to the guitar at the tender age of fourteen and, as they say, got down to business.

Her current goals include musically causing the hair on your arms to stand up, learning Greek, and like fellow Jersey native, Jon Bon Jovi, seeing a million faces and rocking them all.

She recently toured with Regina Spektor, whose phone message also appears on one of Jenny’s songs.