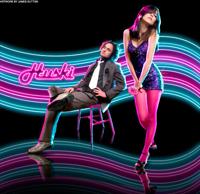 Happy accidents aren’t called as much for no reason. Often from the most unlikely of sources comes something special.

So it was one night in mid 2005 when producer Pike found himself at a party in a Turkish restaurant watching an impromptu two song set by Maple Bee. Pike didn’t know anything about Maple apart from he had to work with her. Bending the truth completely he approached Maple and asked if she could sing on some tracks he had written. Pike didn’t have any songs or even a full set up for Logic Audio. But the connection had been made.

A year later the two, as Huski, had recorded over 40 songs, of which 10 were put together to make the album “Love Peace Pain”. With Pike and Maple co-writing all the songs and Pike producing and playing all the instruments this was a happy accident indeed…

“Love Peace Pain” is a stunning album. From the intoxicating industrial rhythms of “Make Me Your Picture” to the Kate Bush styled ballad “Everything Changes”, from the robotic electro of “Urtica” to the dark pop of “Undatow”, from the easy summer feel of “Easy Life” to the epic yet simple piano led melodies of “You Will be Adored”. Diverse and eclectic influences – from electro to pop to dance to leftfield alternative to ambient and everything else in between – and moulded into a unique and engaging album. Although the majority of the album is produced and mixed by Pike, Simon Gogerly (Gwen Stefani, U2, Lamb, New Order) approached the band about working with them and consequently has mixed a number of the tracks.

From bassist with her sister’s band, cult rock act Queenadreena, to singer and songwriter with the Mediaeval Baebes (whose latest single she has written), to guitarist/vocalist with much respected rock band Vertigo Angels, Maple Bee is an accomplished singer and songwriter. 2004 saw the release of Maple Bee’s solo album “Chasing Eva” (“the feline electronica of Portishead, the tremulous intimacy of Tori Amos and the off beat avant folk of Kirsten Hersh” – Q magazine / “Inspired, enchanting stuff” – Independent On Sunday). “Around The World In A Day”-like the album was self written, produced and played.