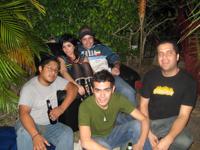 HUMA ROJO appears in the Miami scene where they unite their styles and unique sound in the streets and venues. They have spent the past year polishing their act, trying out different musicians, and building a local following. Their sound is original and melodic, mixing Spanish Rock with a Splash of English lyrics. Originality is combined with their different nationalities, HUMA ROJO is a blend of Mexico, Venezuela, styles, and refined tastes.
Lead vocalist, guitarist, and songwriter Damaris Vicke from Mexico City, has been yet described as "sweet, dark, and sexy". She commands a following with her sweet and angry vocals, choppy guitars, and unique stage presence. Javier Guell, also guitarist and songwriter from the local signed band SONIKO, brings his unique killer guitars, harmonies, and arrangements to Huma Rojo. Perol, bongo player, brings a latin touch and Ritual-ish edge with his steady sound, perfectly in synch with Elias's punchy & classy basslines. Elias, also a sound engineer, has thirteen years in the scene, dating back to playing guitar, drums, and writing in local classics DON PEPE.