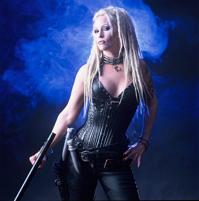 "This is the story of the Phenomenon known as the GENITORTURERS whose audio-visual exploits have
earned them the title as "the WORLDS SEXIEST ROCK BAND"! as well as vast notoriety with music fans
and thrill seekers from all walks of life! Led by the hauntingly gorgeous vocalist extraordinaire GEN, the band (guitarist Chains, bassist Evil D and drummer Angel) serves up one of the most rivoting live
performances to be experienced! The GENITORTURERS have truly earned the respect of fans and press
worldwide due in no small part to their strong commitment to their art both musically and visually. "

-- quote taken from the Official Site