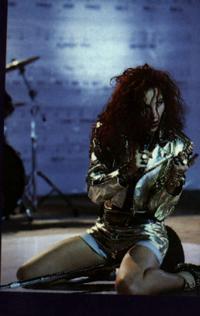 Founded in 1985, they initially fostered a raw amateurness to their playing style but later developed in to a smoother, "sexier" look that still caused some controversy.

Their first release came in the spring of 1986, a double A sided single (with a blank B side) of "XX Sex" and "Rules And Regulations". This led to extensive tours of the UK and Europe and, in November that year, the album release Bostin' Steve Austin (some sources label it self-titled).

In the summer of 1986 the band teamed up with their Vindaloo Records labelmates, The Nightingales and Ted Chippington to record a single "Rocking With Rita (Head To Toe)". The single, credited to the Vindaloo Summer Special, featured Fuzzbox tackling such classics as "Itsy Bitsy Teeny Weeny Yellow Polka Dot Bikini" on the b-side, a full four years before Timmy Mallet and Bombalurina.

For their next album, Big Bang! (1989), they made an abrupt change and reinvented themselves as a slick dance-pop vocal group, with Vickie Perks being cast centre stage as a budding sex symbol. The album had no musician credits, but the girls apparently did little or no playing, and this seemed a repudiation of their punk DIY ethos. The singles "Pink Sunshine", "Fast Forward Futurama" and "International Rescue" were all co-written by Liam Sternberg.

In 1990, they began work on the new album, but the project was halted after the release of the first single "Your Loss, My Gain" due to Perks' decision to begin a solo career under the name of Vix. Her self-titled album flopped, but Fuzzbox had already broken up.