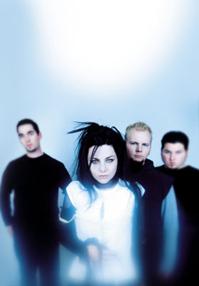 evanescence (ev'e-nes'ens ): a dissipation or disappearance like vapor
Although the band's name may suggest a sudden vanishing, the music of Evanescence is poised for longevity. Fallen, the Wind-up Records debut of this talented quartet from Little Rock, Arkansas, is an emotional, ethereal work of undeniable potency guided by the heavenly vocals of Amy Lee. "We're definitely a rock band," says the 20-year-old Lee. "But the twist is that the band's music is epic, dramatic, dark rock."

Co-founders Lee and guitarist/songwriter Ben Moody met while in their early teens. "We were at a youth camp," Moody recalls. "During some sort of recreational period held in a gymnasium, I heard Amy playing Meat Loaf's 'I'd Do Anything for Love' at the piano. So I went over to meet her, and she started singing for me. I was pretty much blown away, so I suckered her into joining a band with me." Since that day, the musical relationship has remained dependably loyal. "We have the same exact vision regarding what we love about music," Moody says. "When it comes to songwriting, we finish each other's thoughts."