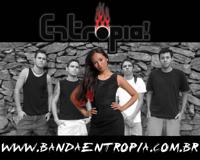 The Entropia at the beginning of 2006, presenting a different idea. The songs bring melodies marked, making a trip through different styles and trends, providing listeners with a single vibration qualities they seek to give the sound a specific identity.

2007 was a great year for banda, which is gaining ever more space in the music scene. In addition to participating in numerous festivals in July, the song "Sem Medo de Cair" was chosen in the contest DEMO HITS of course to turn a cell phone ringing, which can be downloaded for free on the site of course. In September, the banda bands between 270 was chosen to serve on the 6th Uninove Festmusic, one of the biggest festivals of music student from Sao Paulo.

In May 2008 the Entropia came into his studio to record new music at work called "Ânsia (acabou)", recorded in studio Nimbus in Sao Paulo. When the banda is preparing the launch of its first single, entitled "After the Storm", with 3 tracks and is forecast to launch in June.

2008 promises to be a year of many surprises and novelties.