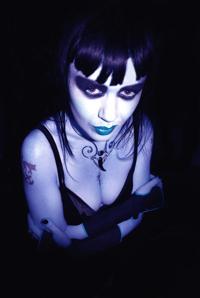 Every now and then a band comes along in which from the moment you first hear of them you are unable to purge them from your mind. Die So Fluid, spawned from the dark depths of the a proscribed past have come to invade your airwaves with their raw and classy metal, tinged with their ethereality, vivaciousness and heavy noise able to make you either sodden yourself with awe or pee with glee. Never before will you have come across a band with so much dynamism. The three-piece (were talking people not sofas here, this is DSF not DFS, remember that) hailing from London is one of the UKs best-kept secrets; ripping riffs and piercing vocals are constituents that parallel the band with such metal connoisseurs as the Deftones, a comparison assuredly to please any deserving musicians, and Die So Fluid deserve it; however this band stand out on their own six metallic feet...

Intensely harmonic and invigorating, Grog, Al and Drew create a passionate vibe crisper than a bucket of KFC. Grogs vocals consist of an abrasive beauty that claws into your soul, seizes all your organs and causes them to jump frantically inside your unworthy body. It is needless to say that Grog is a vocalist like none other, with an enchanting and overwhelming stage presence, sexy disposition and intellect in her lyricism; she is demure and deadly...(well really she is nice as pie, just dont tell anyone!). With Drew and Al sharing the stage with their cool as fuck image, DSF paint a portrait of 100% pure aptitude and soon you'll be hooked on the band's aural sin faster than one of South Park The Movies little ditties!

So what can you hear from this bunch of supreme beings? Well to realise where the addiction does lie, you would have to hear the evidence for yourself. August 6th 2001 and the release of Die So Fluids first single Operation Hypocrite is unleashed like a starved ferocious feline ready to snarl its way back to take its throne as ruler of the Jungle. The single received positive appraisal from airwaves as well as the music press -ROCKSOUND magazine gave the e.p a rank of 4/5! (A review features on the Die So Fluid website) A track featured on this e.p titled Concealed Machine previously was included in the ORGANART compilation Smack My Gorilla Head Off (Organ Radio 16) released July 30th 2001 amongst artists such as Miocene, Vacant Stare, Cortizone, Cay and Lost Prophets. Following the release of Operation Hypocrite was the next single, the spine-tingling and cathartic screamer Suck Me Dry.

Die So Fluid have shared the stage with almighty acts such as Drowning Pool, Vex Red, Janus Stark, The Wildhearts, Boy Hits Car, Harpies, and Rachel Stamp (to name a magnificent few) across the UK and have also headlined many a decadent nights. The band have recently concluded a September 2002 tour supported by the organization Five-Miles-High in which they rained chaos with the almighty B-Movie Heroes, The Suffrajets and C64. Moreover they had the opportunity to let loose on their captive and ravenous audience with their third single Disconnected; proving their ability to emit as much energy on stage as on record. With this latest record blearing out of your speakers you can close your eyes and imagine being amidst the chaos again but it would be much safer if you kept them open. Disconnected charges towards your senses gallantly and as powerful as ever right from the second they wield their axes and pick up their sticks. Before you know it youre hitting the repeat button when youre still yet to wipe the dribble of your chin, which itself is still on the floor.

The bands debut album Spawn Of Dysfunction is due to be unleashed Summer 2003, on a day when a name shall no longer, can no longer be ignored.
Die So Fluid are here and if youre not prepared or a part of the die so domination yet then have no fear as this band are going to be with us for as long as it takes for todays taste to progress!