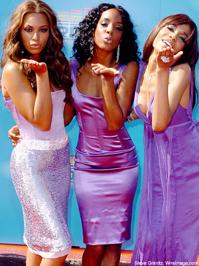 The Houston-based quartet began with the meeting of 7 and 8-year-old girls Beyonc Knowles and LaTavia Roberson. The founding members of the group first met while auditioning for a children's group. Beyonc's cousin, Kelly Rowland, soon joined the girls, and the trio was finally joined by the fourth part of the group, LeToya Luckett.

Worshipping the moves and voices of R&B legendary groups such as the Supremes and the Jackson 5, the children of Destiny's Child started small by performing at local events and moved on to their national television debut with their performance on Star Search.

Not only did their strong voices standout, but their originality and refreshing rap performance was only a preview of what the music industry was in store for.

Soon enough, the group had moved up from the ranks of performing at small-time gigs, to becoming the opening act for popular R&B and hip hop acts Dru Hill, SWV and Immature.

While watching alien-fighters Tommy Lee Jones and Will Smith in the film Men in Black, you may have noticed Destiny's Child crooning in the background. Their single "Killing Time" appeared on the Men in Black soundtrack, and later appeared on their self-titled debut CD.

Destiny's Child was released in 1998, under the Columbia Records label.

The album features Wyclef Jean, Pras and Jermaine Dupri as collaborating producers, as well as their hit single "No, No, No", which went platinum.

If the three awards that Destiny's Child received at the 1998 Soul Train Lady of Soul Awards wasn't enough of an indication of their upcoming success, their next album sure was. The Writing's on the Wall, which was released in 1999, reached the top ten Billboard album charts upon its release.

The album has so far spawned 4 hit singles, "Bills, Bills, Bills," "Say My Name," "Bug a Boo," and "Jumpin', Jumpin'." With their album reaching triple platinum status by the end of the year, 2 Grammy nominations in 1999, an "Image Award" for Outstanding Duo or Group by the NAACP, and contributions to the soundtracks for the films Why Do Fools Fall In Love?, Life, and Romeo Must Die, one would think that the Houston-based group would know no problems -- but that would be wrong.

In March of 2000, it was announced that group members LeToya Luckett and LaTavia Roberson had left the group. It was later revealed that the two members were unhappy with the management of Matthew Knowles, and that they left because of existing "creative differences." LeToya and LaTavia took the group and its management to court, while the remaining members found two replacements, Michelle Williams and Farrah Franklin.

Just when it seemed that Destiny's Child had seen the last of their problems, Farrah Franklin left the group after 5 months, leaving Beyonc Knowles, Kelly Rowland and Michelle Williams (not to be confused with the blonde Dawson's Creek star) as a trio, basking in the glory of consecutive number one hits.