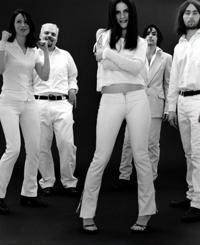 Once upon a time in a small quaint town called District Of Columbia a young disillusioned rebel girl met a young disillusioned rebel boy. Classic; he was new in town - she had been around town, twice. They hit, they fell, they decided to leave together. Find some action. Only one city in the world big enough for the both of them - New York City. Cristina Martinez and Jon Spencer met on the feast of Immaculate Conception in 1985 at a Jesus & Mary Chain show at the original 9:30 club in Washington, D.C. Jon had just arrived, a wayward Brown University dropout looking for a way out. D.C. was no match for Pussy Galore, his now legendary seminal punk band. Having had their fill of the nation’s capitol, they relocated to New York. Bad seeds to the rotten apple. The boy had a band - The girl took pictures went to film school and bitched a lot. A couple of years passed. Cristina was to attend the New York University Summer Film program but instead dropped out to be 3rd guitarist for Pussy Galore until it became apparent that she was too bossy for the band. She had to start her own. In 1989 they did the inevitable and started a band with degenerate friends. Enter Boss Hog. Boss Hog started in 1989 as a last minute fill in for a cancelled group at New York’s famed CBGB’s. Cristina assembled a group of rag-tag players to form the original all-star line up of Boss Hog. It included members of Pussy Galore, the Honeymoon Killers and Unsane. A constantly rotating cast of misunderstood misfits. Very angry, very volatile The perfect medium to express their rage, their confusion, their sense of humor, their love of music. They made records as testament to their experience on numerous labels, the details unimportant. This line up managed to record their 1989 debut EP as well as their first full length album in 1990.both records were well received due in part to the line up and their now legendary eye-catching artwork. This initial line up was soon to be fractured due to constant bickering which, on occasion, spilled over into violence. Cristina and Jon then searched for new members. Eventually they found permanent partners in crime German art student Jens Jurgensen (bass) and Lower East Side scenster Hollis Queens (drums) joined the fold. In 1993, they recorded the "Girl +" CD which brought them wide critical acclaim and showed remarkable musical growth. Two years later they recorded "Boss Hog" for DGC records and began to get the international attention they so deserved. They made this new record, Whiteout with Andy Gill (performer, producer /Gang Of Four, Ris), Tore Johansson (producer / Cardigans), JG Thirlwell (performer, producer / Foetus, Wiseblood), Roli Mosimann (performer, producer / Wiseblood, The The), Jim Sclavunos (performer, producer / Bad Seeds, Gunga Din, etc.) Lots of details. Point is, they still play together, pretty damn well. They still get off on it. You should see it.

-- Source: In the red records