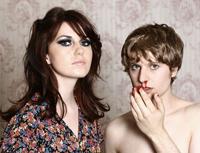 Their debut album Box of Secrets was finally released in April 2008 on Mercury Records, where they were transferred to following the sale of V2 to Universal.