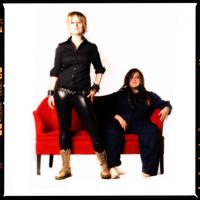 An explosion of sick beats, riffs, and synth - this band takes pop and shoves it in your face.

The band is an amalgam of styles, opinions, and personalities spanning the whole spectrum of possibility. It works and these girls definitely work it. From the synth-pop-rock ballad ‘Spun’ to the rock-reggae ‘I Said No You Said Yes’ and pop anthem ‘Goodbye Girl’, this band will rock your face off and melt your heart. Their high energy set is a huge draw bringing in fans of all ages and musical tastes as diverse as the band itself.

A love for playing live music brought the band members together in 2006. A twist of fate had them join musical forces in 2007. A drive to create music had the band write a record in 2008. A small surplus of cash saw them through the making of this record in 2009. AND, a chance meeting with EMI Publishing CEO Mike McCarty and his top writer Simon Wilcox in mid 2009 positioned the band for an opportunity to write and record a demo in Los Angeles in August with producer Mike Green (Paramore, Good Charlotte, Plain White T‘s). The demo, tentatively titled ‘The L.A. Sessions’ contains two new Apocalypstic tracks which showcase the band’s pop-rock edge and energy.

They’d want you to know though, that they write and make music for themselves. It’s simple: if they wouldn’t listen to it, they won’t play it.