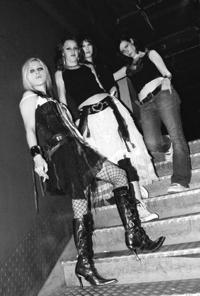 The album was produced by up and coming producer Richie Kayvan in between a healthy touring schedule that's spanned the last two and a half years with tracks being ferried to the U.S. to Evil Joe Barresi producer of QOTSA and Tool to mix.

Since forming in November 2003 Brighton based McQueen have been busy playing alongside everyone from Juliette and the Licks , Viking Skull and The Foo Fighters through to acts as diverse as the Towers of London , Mad Capsule Markets and the Kaiser Chiefs .The band even appeared on the recent Dirty Sanchez tour.


This year has seen the band sign to independent rock label Demolition Records home of many great new and old rock acts from the likes of Electric Eel Shock through to Hanoi Rocks and Twisted Sister. Prior to signing to Demolition McQueen also inked a string of separate international deals with a number of independent labels around the world including Mercedees Records in Finland and Rubber Soul Records in Australia (MGM distribution) who will all also be releasing the album. "Break the Silence" is currently set for January 22nd 2007 release and the band will be heading out on their first headline tour in support of its release.

Here's what the UK rock press has had to say about McQueen:

McQueen play filthy punk rock, chock full of the type of catchy riffs and anthemic choruses that the music scene has been lacking so severely recently.' BIG CHEESE

These sisters have wasted no time in doing it for themselves, showing up their counterparts whether male or female in the process. They're hell bent on putting the grittiness back into female-led rock n'roll.' ROCK SOUND