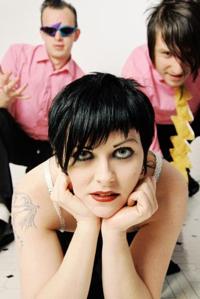 "Compared to both B-52s and Hot Hot Heat, Bang! Bang! has a lot of energy to throw around and it barely wastes an ounce of it on this, its full-length debut. With the double vocal sass of Jack Flash and Gretta Fine, this Chicagoland trio moves from eerie, to sexy and never strays from anywhere thats exactly in between the two. Whereas its fashionable for some contemporary bands to try a little too hard to capture the satanic panic of the disco floor and the sleek sex of the limelight, Bang! Bang! never seems to force the issue, emerging with a natural sounding heart attack that will leave listeners reeling for hours after this 12-tune release has wound to its close. Who needs designer drugs when theyve got Bang! Bang!?" - Jedd Beaudoin 2006, Copper Press (on "Decked Out")

"Sounding like the oversexed offspring of The B-52s, The Buggles and Devo, Bang! Bang! holds new wave's (and Glam's) punk roots close to its heart as it bumps and grinds. Decked Out, with its cunning combination of giddy pop hooks and suggested lust, establishes the Chicago outfit among the leaders of today's new wave revival such as The Epoxies and Menthol. [But] Bang! Bang! isn't falling into the world of I Love the '80s camp and nostalgia. For every plastic, soulless new wave outfit, there was one just as sincere and important. Bang! Bang! is one of the latter." - Aversion.com 2006 (on Decked Out)

"Bang! Bang! wield a simple, obvious weapon that the apathetic "first band" types always miss: they know how to play their instruments. Consider vocalist/guitarist Jack Flash's ability to conjure gritty fifth chords and muffled stabs, pepper his guitar lines with metal-friendly pick-slides, grunge up the band's sound with octave melodies and show off a carefully restrained yet technically tight soloing style -- all over the course of a single track, "Candy Stop". Though vocalist/bassist Gretta Fine prefers to pout out "la, la, la / oh, oh, oh"-type stuff and be your baby-doll on most of her songs (she and Flash trade vocal duties from track to track), she can still harness and release a decent range, including the rage of a psycho stalker who looks gorgeous while she slashes your tires in broad daylight. Her bass work is generally minimal and grounded, but she carries the melody and riffs as actively as her cohorts. Bang! Bang!'s chops aren't just for show; their skill allows them to work with varied dynamics, push different colors and textures and penetrate your senses with the little details that make for multi-dimensional music. Electric Sex is already catchy and danceable, but Bang! Bang! won't be content until they get every last one of you out on the floor." -- Dave Madden / Splendidmagazine.com 2005 (on "Electric Sex")

"A Chicago trio that could melt a tundra with it's spunky, unyielding brand of sexually charged glam-punk" -Venus, March 2004 (on "Do You Like It?")

"A hot and saucy frappe of downtown club rock and back alley sex grooves thats hotter and more convincing than the Yeah Yeah Yeahs affected boho skronk. And yes, you can dance to it, and probably fuck to it, too, though you might wanna stretch a bit before attempting to keep up with the pelvic beat." -Sleazegrinder.com 2005 (on "Electric Sex")